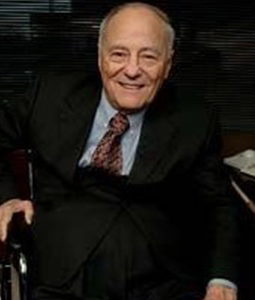 (January 1, 1930 – November 8, 2005) Alan Reich was the founder of the National Organization on Disability. In 1962 Reich sustained severe spinal injuries in a diving accident, making him a wheelchair user for the rest of his life. Afterward, Reich returned to Polaroid where he served as an executive in manufacturing management and corporate long-range planning until 1970 when he became the U.S. Deputy Assistant Secretary of State for Educational and Cultural Affairs. In 1982 he founded the National Organization on Disability (NOD).

Reich was born in Pearl River, New York, and graduated from Dartmouth College in New Hampshire, where he was an all-American track and field athlete. He received a master’s degree in Russian literature from Middlebury College in 1953, a diploma in Slavic languages and Eastern European studies from the University of Oxford the same year, and a master’s degree in business administration from Harvard University in 1959. He spoke five languages.

Reich served as an infantry officer in the U.S. Army and as a Russian-language interrogation officer in Germany.

After working in the State Department, Reich’s efforts eventually led the United Nations to declare 1981 as the International Year of Disabled Persons, and Reich became president of the organization coordinating American activities in observance of the year: the U.S. Council for the International Year of Disabled Persons. Afterward, leveraging the momentum from these observances, Reich led the council’s evolution into an independent organization, the National Organization on Disability.

Three years later, Reich founded the Bimillennium Foundation to further extend the reach of the 1981 event and to encourage leaders of nations worldwide to set year-2000 goals aimed at improving the human condition. In 1990, Reich, along with Richard and Ginny Thornburgh, board members for the National Organization on Disability, persuaded Pope John Paul II to sponsor a 1990 world symposium on disabilities at the Vatican.

Reich also established the Franklin Delano Roosevelt International Disability Award on October 24, 1995, the 50th anniversary of the United Nations (UN). The award recognized and encouraged progress by nations toward “the full and equal participation of people with disabilities in the economic, social, and cultural life of their countries, regardless of the level of development.” The winning country received a $50,000 cash prize for an outstanding nongovernmental disability organization in the selected nation and was presented to the head of state at an annual ceremony at the UN.

Immediately after the September 11, 2001, terrorist attacks, Reich organized the leaders of disability groups to make sure that planning for future emergencies included accommodations for people with disabilities.

In addition to his other achievements, Reich served on the People-to-People Committee on Disability, and the boards of the Paralysis Cure Research Foundation and the National Paraplegia Foundation. He was the first wheelchair user to address the UN.

Reich was one of ten honorees of the AARP Impact Award in 2006 for his work as a disability activist. He received the George Bush Medal for his work on behalf of people with disabilities and was named a member of the Officer Candidate School (U.S. Army) Hall of Fame.