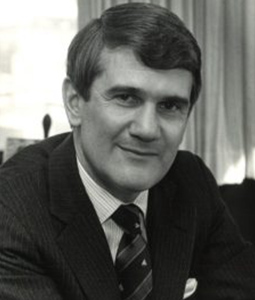 Michael R. Deland was Chairman of the Board of the National Organization on Disability (NOD), from 1995-2006, and President from 2005-2006.  While at NOD, Mr. Deland initiated and spearheaded the successful campaign to add a statue of President Roosevelt in his wheelchair at the FDR Memorial.

Prior to joining AFS, Mr. Deland served as Chairman of the White House Council on Environmental Quality.  He was appointed to the position in 1989 by President George H.W. Bush followed by unanimous confirmation in the United States Senate. His responsibilities included serving as the “in-house” environmental and energy advisor to the President and coordinating the development and implementation of environmental and energy policy for the Executive Branch.  He also organized and chaired the President’s Commission on Environmental Quality, composed of twenty-five of the nation’s leading corporate CEOs and environmental group leaders.

From 1983 to 1989 Mr. Deland was the New England Regional Administrator for the U.S. Environmental Protection Agency. Under his direction, the EPA filed the landmark federal lawsuit to clean-up Boston Harbor and initiated the precedent setting wetlands protection action to preserve Sweden’s swamp.

From 1976 to 1983 Mr. Deland worked in the private sector as Counsel to Environmental Research and Technology Inc., then the nation’s largest full-range environmental consulting company.  He published numerous papers and articles and received many awards and citations, including the National Wildlife Federation’s Special Achievement Award for his role in the clean-up of Boston Harbor and for protecting valuable fishing areas from offshore oil drilling.

Mr. Deland received his Bachelor of Arts degree from Harvard College in 1963 and served as an officer in the U.S. Navy before obtaining his law degree from Boston College in 1969. He was a member of the Bar of the Commonwealth of Massachusetts and of the United States Supreme Court. He served as Vice Chairman of the World Committee on Disability,  and served on the Board of Directors of the Boston Globe Newspaper Co., and the World Resources Institute.  He was a Corporation Member of the Woods Hole Oceanographic Institution. He served on the vestry of St. John’s Church, Lafayette Square, Washington, D.C.

His former affiliations included: member of the U.S. Advisory Committee of Hydro-Quebec, director of the Harvard Alumni Association, trustee of Noble and Greenough School, vestry member of the Trinity Church, Copley Square, Boston. He was a member of Phi Beta Kappa, Harvard University (hon.) and was awarded an honorary doctorate from Taegu University in Korea. Mr. Deland is survived by his wife Jane and their three children.