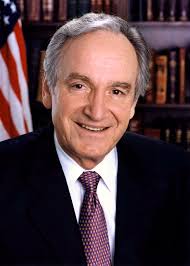 WASHINGTON, DC (October 13, 2020) – The FDR Memorial Legacy Committee (FDR Committee) is pleased to announce the addition of two new Advisory Committee members, U.S Senator Tom Harkin (Retired) and Serena Jaros, COVID Services Coordinator at Independence Now. The mission of the FDR Committee is to ensure that the efforts by the disability community to guarantee representation at the FDR Memorial in Washington DC is not forgotten and, as initially intended, becomes part of the Memorial’s educational materials, visitor information, and collective memory.

Senator Harkin was the chief architect of the ADA, which was signed into law on July 26th of 1990. The Iowa Democrat, who served in the U.S. Senate from 1985 to 2015, calls the ADA passage his greatest professional achievement. Reflecting on the importance of including the depiction of FDR in a wheelchair, Senator Harkin said in a March 2020 interview, “A lot of the things he was known for came to him after he was disabled, not before.”

Serena Jaros launched her career in Washington, DC, through the coveted and competitive internship program at the American Association of People with Disabilities (AAPD). Jaros currently serves as the COVID Coordinator at Independence Now, a center for independent living serving Prince Georges and Montgomery Counties in Maryland. When asked about her role on the Advisory Committee, Jaros replied, “Disability history and legacies are some of the least discussed subjects in the public discourse. This project is an opportunity, not only to honor the memory of a great disabled leader but also to push for greater integration of disability history and activism into the mainstream.”

Every year nearly 2.5 million people visit the FDR Memorial in Washington, DC, dedicated in 1997 to pay tribute to Franklin Delano Roosevelt. Visitors now experience a seamlessly constructed memorial; however, representation of FDR’s disability was not included in the initial design. After a hard-fought campaign led by the people with disabilities, the first room – Prologue – was eventually added four years after the initial opening of the Memorial. The FDR Committee’s priority is to ensure this story is accurately told and preserved for history.

The FDR Committee brings together historians, disability and civil rights advocates, artists, academics, leaders in government, business, and non-profits, and interested people from across the country. The FDR Committee operates independently under the non-profit status of the National Council on Independent Living (NCIL), which serves as a fiscal sponsor.  www.fdrmemoriallegacy.com